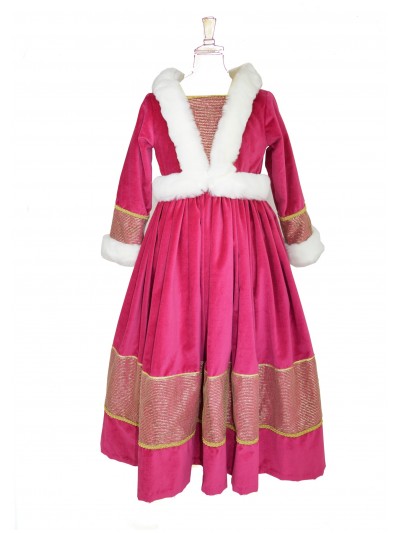 made of a beautiful fuchsia velvet.

Skirt linign covering with two layers of tulle for an astonishing volume.

Bodice fully lined by cotton for a perfect confort.

A matching chapka is recommended to order with.

Anna, a young Russian Tzarina grew up with her young sister in San Petersburg as a Crown princess.

Her father Peter I of Russia planned to marry his daughters to foreign princes in order to gain European allies for the Russian Empire.

The two girls were educated with this aim in mind, learning literature, writing, embroidery, dancing and etiquette.

Anna developed into an intelligent, well-read girl who spoke four foreign languages – French, German, Italian and Swedish. Anna’s modesty and shyness were evident at an early age. The uncommon beauty of Anna impressed foreign visitors to the Russian court.